These days it takes a lot to convince me of the authenticity of a relationship in a Tamil film. Unlike the teen version of myself I no longer believe in ‘love at first sight’, and even ‘love conquering all’. So with the exception of a few directors’ work I am not easily satisfied with hero/heroine relationships that are seemingly ignited, matured and sealed within a 2 hour (or 2-3 duet) formula.

Similarly, I am not easily touched by most onscreen parent/child relationships in Tamil cinema either. Perhaps it’s because I was blessed with a fairly chill set of parents (yes, Amma & Appa, you guys are alright; don’t let this go to your head now), but I often find the typical parent/child bonds depicted in Kollywood to be overly dramatic or one dimensional.

But I do feel that once in a while Kollywood gives us a few films with truly complex, realistic and even aspirational parent and child stories. And with Theri fever in town I can’t help but wonder if director Atlee’s highly anticipated second film will be one of those rare films. It’s no secret that the story of Theri will pivot heavily around Vijay and baby Nainika’s characters as a cutesy single father and daughter pair. In fact, based on the teaser and trailer, it’s this on screen pair I’m most looking forward to in the movie, versus Vijay and Samantha or Amy Jackson.

But they have a lot to live up to if they want to join the ranks of great father/daughter depictions in Tamil cinema. And perhaps it’s because cinema is the thing that connects me and my own father the most (the one thing we most often agree on!) but some of my all time favorite Tamil films have heavily focused on such poignant relationships.

Nayagan set the bar for me. Most people probably associate that film with godfather-ism but to me, this first film of Mani Ratnam I remember watching (once I was sort of old enough to comprehend it) was especially about the conflicted relationship he shared with his daughter, because she was the child who most took after him in strength and resolve. In Velu and Charumati we saw a father who tried his best to shield his daughter from his dangerous line of work, and in the process, drove her away. Charumati’s decisions to aid in the arrest of him could be seen as her best attempt to save the father she loved but didn’t agree with; she tried her best to save his soul. Nayagan may be categorized as a film about a mafia-type leader, but to me it will always be about a tortured and simultaneously loving father/daughter bond.

Kannathil Muthamittal, another one of my all time favorites and another Ratnam great, on the other hand, showed us only pure, unconditional affection between a father and the daughter he adopts as his own. Thiruchelvan and Amudha gave us one of the most heartwarming relationships in Tamil cinema, iconic in fact, where a young man felt the calling to fatherhood, marriage and family upon hearing the cries of this special little abandoned girl. I adored the father and (pretty spoiled) daughter relationship in Kannathil Muthamittal that drove an entire narrative about Sri Lanka and even showed us the importance of adoption, especially for children who are innocent victims of warfare.

Beyond the blinding lights: Uttama Villain

Fast forward to 2015’s Uttama Villain, one of the best films of recent times to portray the strains of an absentee father and a daughter who doesn’t know how she feels about him, because she hasn’t been given a chance to. Amongst all the relationships the character of Manoranjan tries his best to save in his dying days, my favorite was the one he found with the daughter he didn’t even realize existed. To see a headstrong celebrity crumbled to a mere mortal desperate to forge some bond with his equally stubborn daughter, the only product of his one true love with whom he was denied a happily ever after, elevated Uttama Villain to a different standard of Tamil Cinema. And that poetically written (and expertly acted) relationship put that film amongst the best dad/daughter tales in Indian cinema according to me. 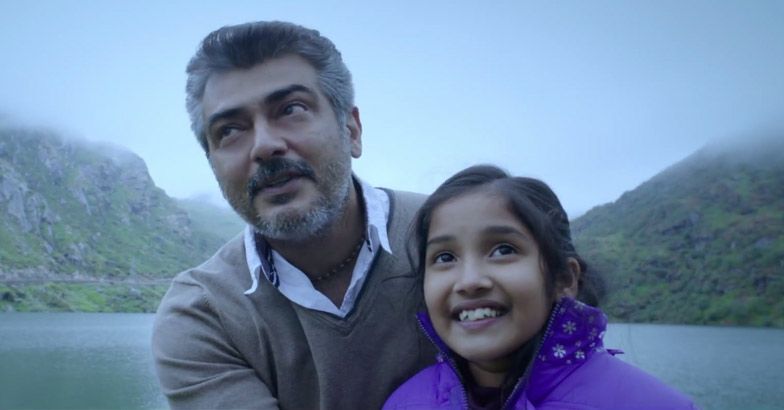 But of course no piece on my favorite father/daughter stories in Tamil Cinema could be complete without a mention of Yennai Arindhaal. In the strong yet sensitive Sathya Dev we were given a touching tribute to step parents, as well as single fathers, everywhere. Sathya Dev and Isha’s unique connection as they become each other’s sole family and help one another through the grieving process of losing Hemanika, showed us the beauty of those single parents who devote their lives to their children and step parents who consider the children of their partners as their own blood. In fact the song video alone for “Unakenna Venum Solle” is probably the sweetest/most singular homage to non-traditional fatherhood in Indian cinema history.

Since glimpses of the father/daughter relationship in Theri portray Vijay playing a devoted single father himself who takes on both the roles of a mother & father to his little girl, it’s natural that people are already drawing comparisons to Theri and Yennai Arindhaal. Will Joseph match up to the parenting power of Sathya Dev? Well, with Atlee at the helm, I think he has a chance to. Let’s not forget that in the young director’s very first film, Raja Rani, we were given a beautiful father daughter pairing in James and Regina; a dad and daughter who were more like BFFs then they were a parent & child. I look forward to seeing how this perceptive director who has already proven his mettle for illustrating the complexity of relationships continues that trend in Theri, even with a switch of overall genre from romance to action.

I would love it for the summer’s highly hyped Theri to join my list of engaging ‘daddy, dearest’ type films.

Written by Dilani Rabindran﻿, just another average Canadian born & raised Tamil girl with an MBA, a spunky attitude & love for all things cinema, comedy, music, dance, pop culture and chocolate-based. She bring Indian cinema to the world full time, and takes selfies part time. She talks a lot, and sometimes writes a lot. You can read some of that writing right here on www.fullyfilmy.in.