7 Reasons that make Vijay Sethupathi one of Kollywood's brightest tale 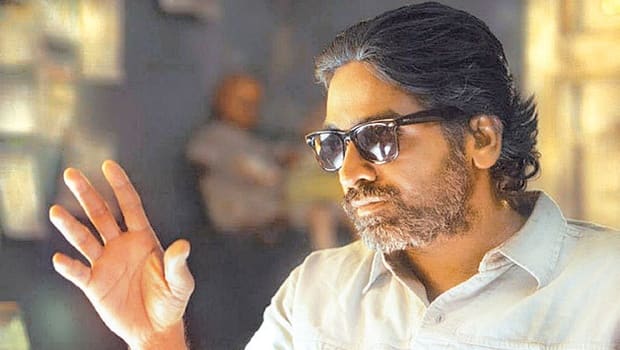 Of the million actors we have, what makes Vijay Sethupathi different? How does he manage to crack us up every time he gets on screen, whether he’s playing a "Sumar Moonji Kumar" or "Pondy Pandi”?

Here are 7 reasons that make Sethupathi who he is or to say it in his own words, Indha 7 vidhigalai follow panna, acting enbathu oru arumaiyana vishayam:

1. Dialogues with a difference

Something as simple as 'PPPAAAHHH!' became a catchphrase, thanks to this man

Despite the brilliant dialogues he has been blessed with, he also elevates an otherwise ordinary piece of dialogue to levels yet unseen. Right from "Enna Achu" to "Kumudha Happy annachi" to "Kaadhu ma, You okay baby?” which might sound very mediocre on paper, he has managed to create his own space in the context of dialogues, giving them a twist that only he can. Let's say he's a machine that converts lines into punchlines!

A film that would've been unfathomable to even consider making, if not for Sethupathi: Pannaiyarum Padminiyum

To complement his undoubtable talent, he also makes sure that he picks the right scripts to perform, irrespective of whether it falls under the same genre. Here’s a man who doesn’t shy away from working with new and unheard of directors, groundbreaking stories, potentially taboo subjects and anti-mass, human-interest plots.

If you look deep into it, you would notice the similarity in scripts but a uniqueness in the way he approaches his character and performs. Let's take Soodhu Kavvum, Idharkuthane Aasaipattai Balakumara and Naanum Rowdy Dhaan: the three movies basically share a similar comic undertone. And even within the comic space, each of his characters are contrastingly different from each other; cleverly dodging the pitfalls of cliches.

3. A tour de force of inspiration

Instead of us trying to explain this point, let’s just allow you to watch THIS:

If you have paid attention to my previous posts (which I highly doubt you did) I would've spoken about changing audiences. Our "smarter" audiences know and understand that versatility is a necessity today and one man except for the other greats, managed to do this with ease.

Age is just a number, but Vijay Sethupathi is more than 'just an actor': Orange Mittai

In the 5-6 years he has been in the industry(playing lead roles), he had managed to give us a wide array of movies. Though comedy is his most revisited genre, he has also managed to produce a brilliant horror thriller(Pizza), hardcore emotional dramas(Panayaarum Padminiyum and Orange Mittai) and even played grey-shade laden supporting characters(Sundarapandian and Purampokku).

If you lay out these cards, you'll see a variety of movies that he has made in a short span which other actors who entered with him haven't really done. NO, IM NOT TALKING ABOUT SHIVAKARTHIKEYAN, Psst.

^(some meat for fan boy wars)

The omnipresence of the sidekick: Vijay Sethupathi in Naan Mahaan Alla

Many of the actors we have today have found a rope which they clung onto and gained an easy entry into industry, and if it doesn't work out, they relinquish their space and start other businesses. VS wasn't like that. Despite not having any connections in the field, he fought his way through to get to where he is now. If you watch a few old movies like Pudhupettai and Naan Maahan Alla, you'll find this very familiar face in the background. This familiar face is none other than one of the most decorated actors today, Vijay Sethupathi. He didn't click as he quickly as he thought he would but he never, ever gave up. After doing side roles and sidekick characters for years, he got his first break in what turned out to be the game-changing film which not only changed his life but also Tamil cinema forever.

Blast from the Past: Bobby Simha, Vijay Sethupathi and Alphonse Puthren

If you spoke about short film makers getting into the field a decade ago, people would have called you a madman! But when a bunch of nobodies armed with nothing but a passion for cinema walked onto the sets of Nalaya Iyyakunar, Tamil Cinema as we know it changed forever.

This team consisted of Karthik Subbaraj, Alphonse Puthren, Nalan Kumaraswamy and many more. Despite going their own ways in the industry they never fail to help each other out; especially Vijay Sethupathy teaming up with his partner-in-crime Karthik Subbaraj every now and then.

7. An undying love for cinema

Right on target: Sethupathi in and as 'Sethupathy'

“If you love movies enough, you can make one.” - Quentin Tarantino

The only thing that an actor needs nowadays is the love for their art. Looks don't matter anymore, nor do other skills. I personally believe that if someone loves and understands the value of the art they perform, nothing can affect them. VS, like most actors knows and does exactly what people want, and a little more.

And within a week of its release, Vijay Sethupathy’s latest film, Sethupathy(how ironic, no?) is raking in the laurels and is slowly turning into a game-changer in terms of cop films. We’re extremely proud of everything he’s achieved so far, yet, we believe he’s just getting started.

In his own words,